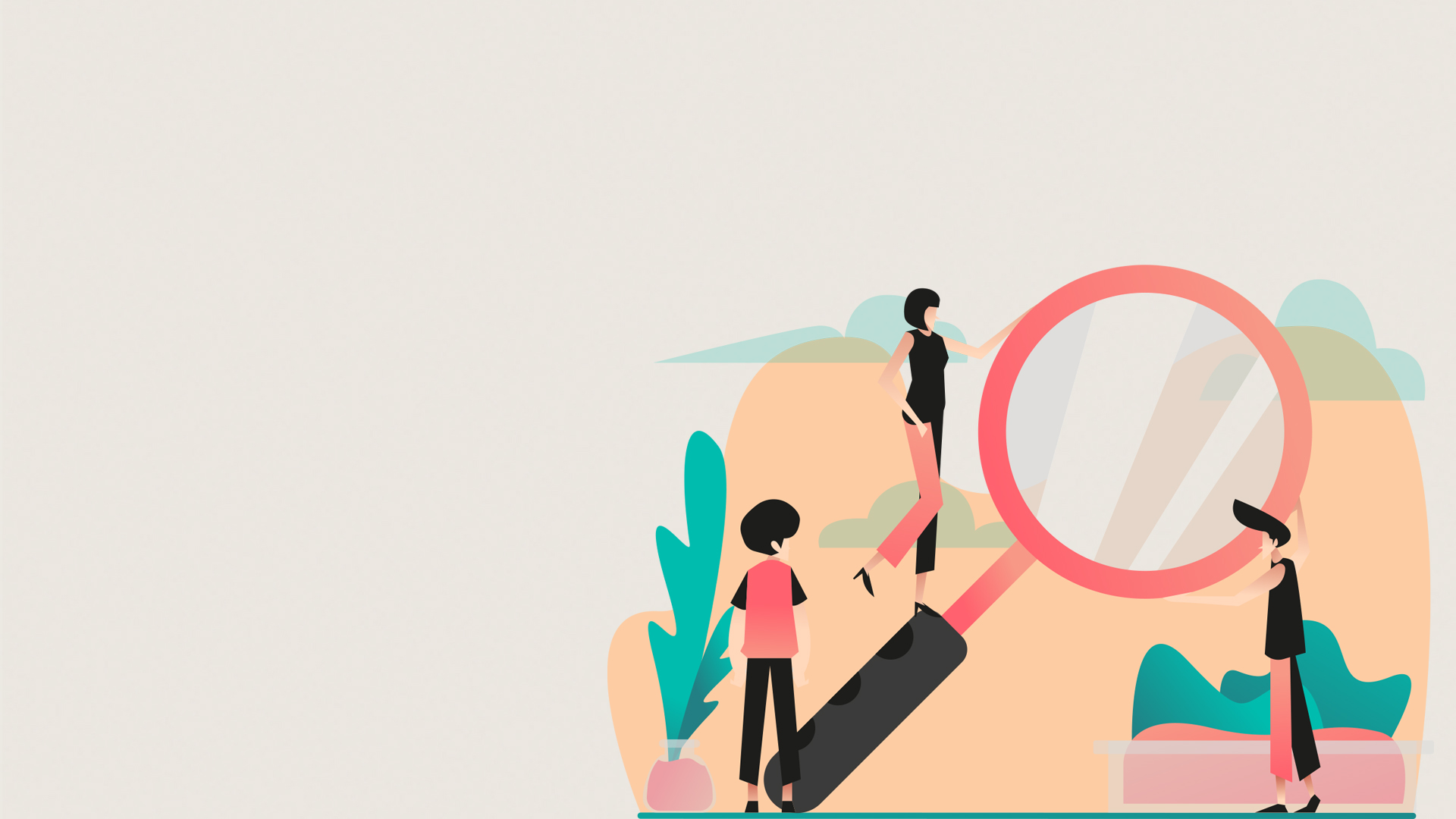 An overview of 8 alternatives to Google that convert your searches into social good. 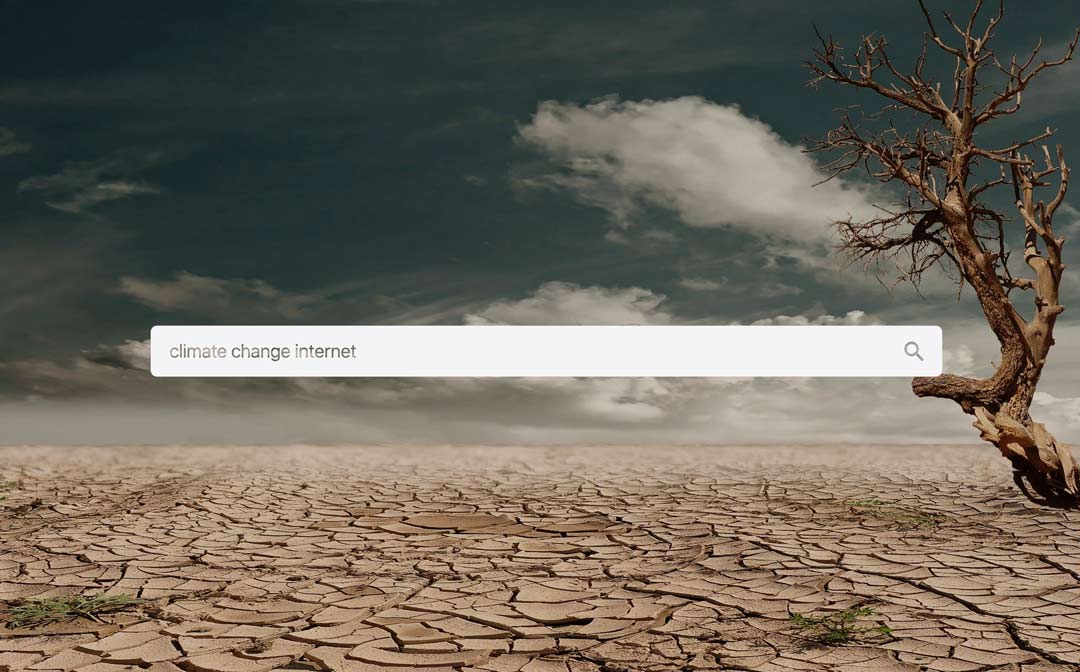 Google is the most widely used search engine globally and has dominated the market for years. But what if we told you there were search engines other than Google that are just as effective and allow you to contribute to social causes simply by using them?

Search engines may not seem detrimental, but in a time of growing consciousness about the impact our activities have on the world, there are a growing number of alternative search engines which are actively doing social good.

There are multiple considerations when analyzing the footprint of a search engine.

Energy is one aspect. According to one report, a basic Google search uses the same amount of energy as switching on a 60 watt light bulb. With an average of nearly 80,000 searches per second that amounts to a lot, and it’s even more for data-heavy content such as videos or maps.

But it's more than just energy, there are also privacy considerations. It is well known that many websites store your data and browsing history to produce more targeted results. This may make your searches quicker but it also limits what you’re seeing, not to mention the security concern of where your data may end up.

Furthermore, searching is a revenue-generating tool for advertising which is worth approximately €98 million per year. On a platform like Google that all becomes profit, but there are now alternatives that convert revenue generated from your searches into contributions to social and environmental projects.

We take a look at 8 of the alternatives, listed in order of percentage profit donated to charity.

Search the web to save the planet. SearchScene 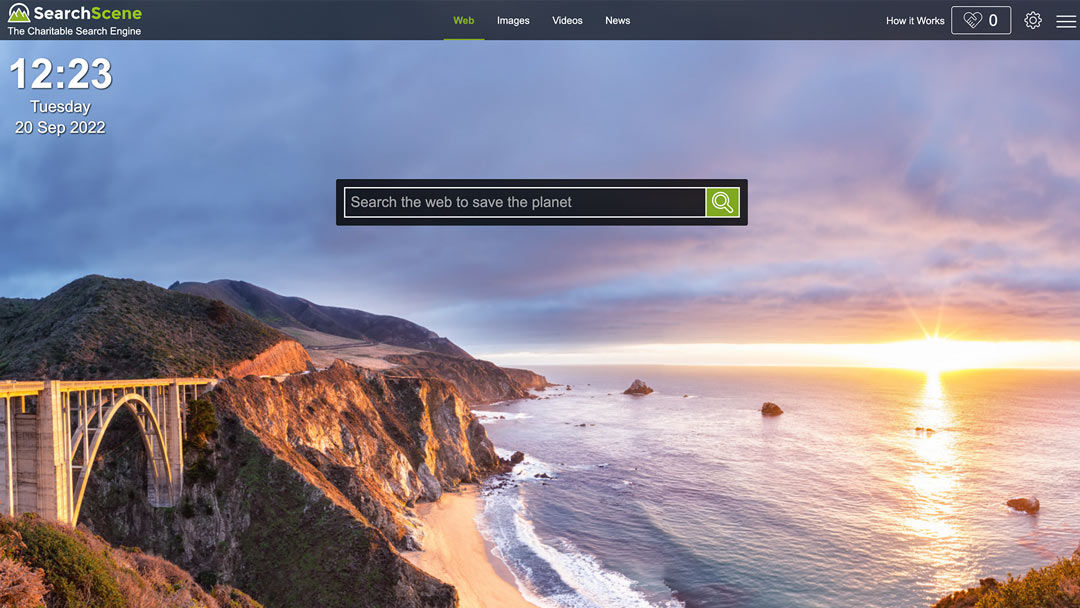 SearchScene donates a whopping 95% of their profits, more than any other charitable search engine. They support a list of well know charities covering all causes including Oxfam, Wateraid and the WWF.

You can select which charities you want to support and can keep track of how many searches you make across devices. They also take privacy seriously, not storing any personal data and automatically deleting their server logs every 30 days.

SearchScene also has a customizable interface, along with browser addins, is powered by Bing and enhances its results using other sources such as Wikipedia, IMDb and Tripadvisor. 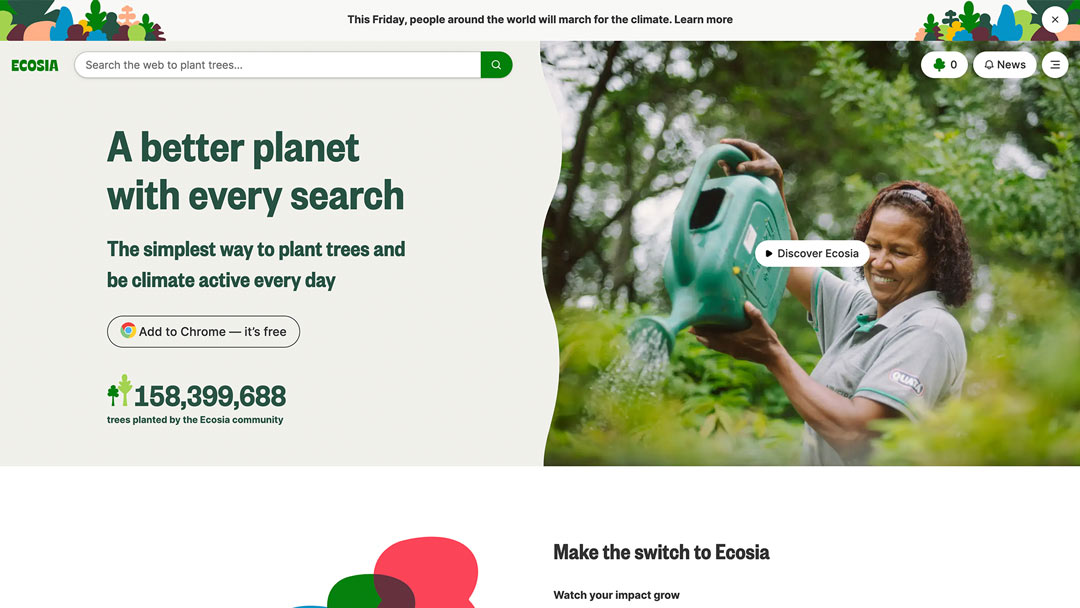 Ecosia is a search engine that plants trees. In fact, it promises to plant a tree for every 45 search queries and reports to have planted nearly 124 million trees so far.

Ecosia’s servers use 200% renewable energy for searches and claim that every search removes 1kg of CO2 from the atmosphere. They also promise not to use third party trackers or to sell your data to advertisers.

As a non-profit organization, they invest 20% of their profits into renewable energy, regenerative agriculture and grassroots activism. The remaining 80% goes towards planting and protecting trees around the world.

Ecosia is also powered by Bing and is available as an extension to Apple’s Safari browser.

Search to save our oceans. Ekoru 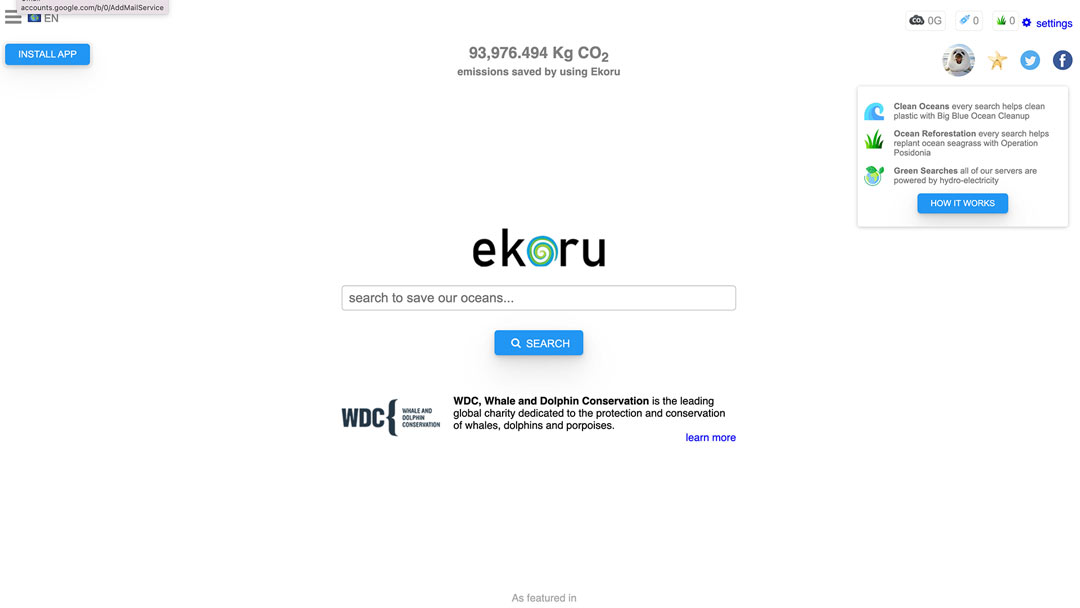 Founded in Australia, Ekoru is primarily focused on climate change and donates 60% of its monthly revenue to charitable partners working on a range of issues from reforestation to conservation and animal welfare, selecting a different cause each month.

What’s more, their social good ethos runs right through their operations. They don’t store user or search-related data and commit to using only renewable energy sources for their data centers.

Powered by Bing, Ekoru is available on desktop computers and they have teamed up with location firm What3Words to deliver map results. You can also change the look of the search page.

Search the web to give water. Elliot for Water 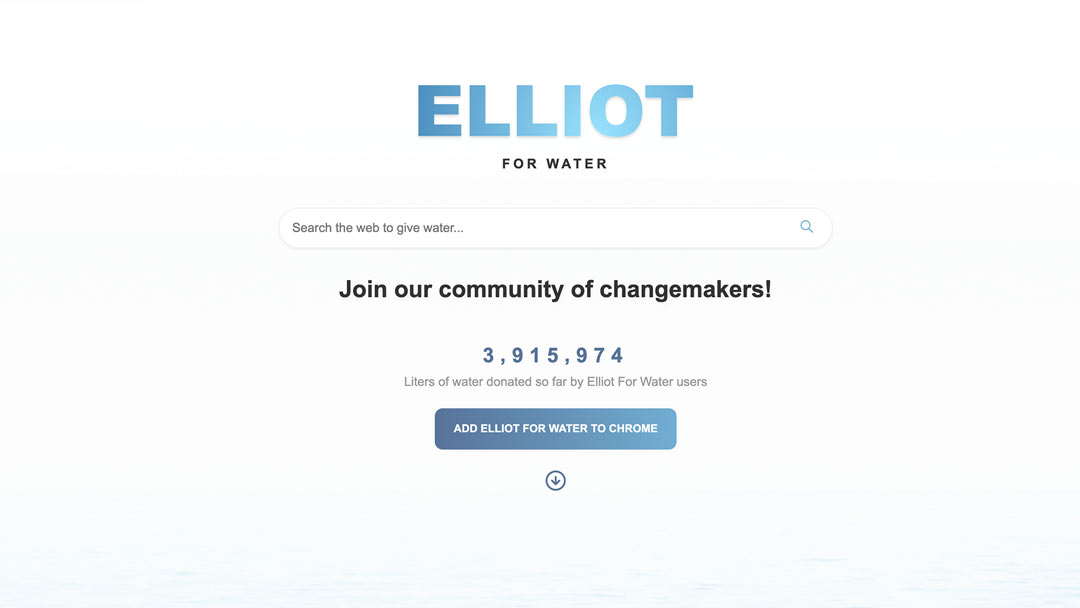 Elliot for Water donates 60% of its profits to various social causes that support the implementation of clean water. So far 1,678,016 liters of water have been donated by users of the search engine.

They have a strong focus on the overall benefits of clean water such as health, education, women’s empowerment and better childhood and aim to save the lives of 760,000 people every year.

Another big emphasis for Elliot for Water is to provide clean water in a circular way. They respect the needs of the local culture and environment, and empower local people to maintain the systems themselves.

Raise money for charity when you search the web. Everyclick 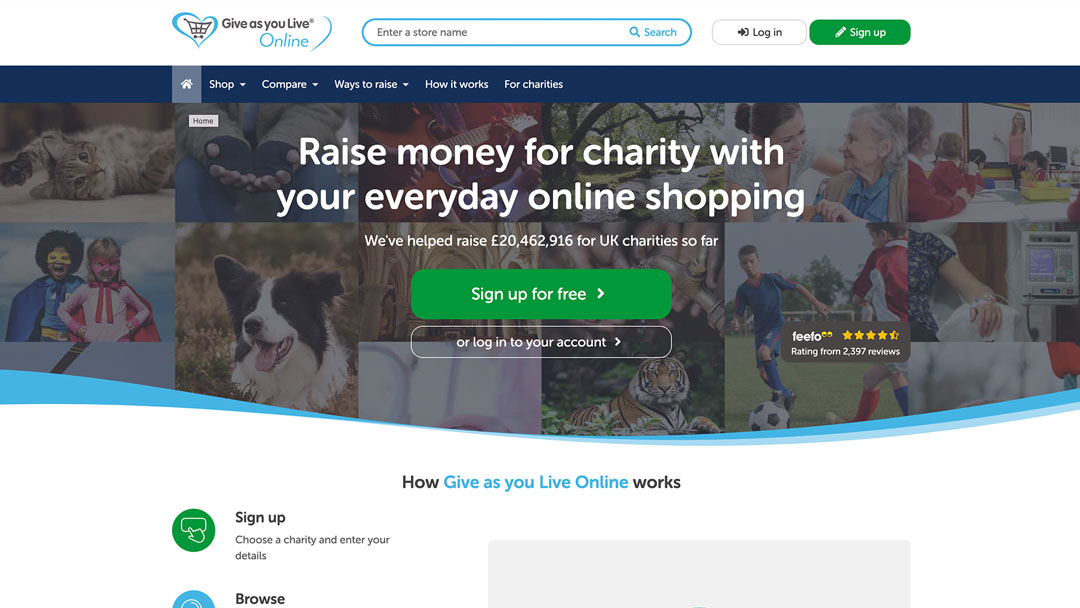 Based in Britain, Everyclick works with UK charities, donating 50% of its revenue. It does require an account to get going but once created, you select your preferred charity and every search you make directs money to them.

You can also shop through their ‘Give As You Live’ program which is compatible with 4,500 different online stores.

There are over 200,000 charities to choose from, covering all causes, and they offer the option to raise money for charity at no cost to you.

Give clean water every time you search the web. GiveWater 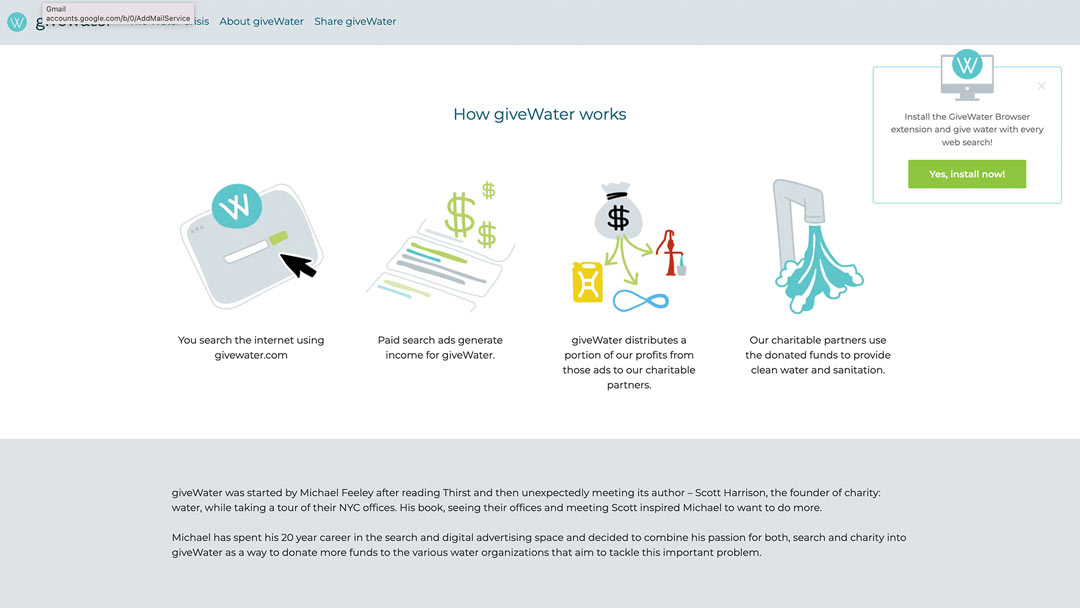 GiveWater partners with charitable organizations that use the donated funds to provide clean water and sanitation for people in need.

The information on their website gives a great overview of how their profits are used, including that the founder does not take a salary from GiveWater. Although it doesn’t have any detailed stats about their contributions, it does plan to publish that information in the future.

Their engine is powered by Bing and there are desktop browser extensions that can be installed. 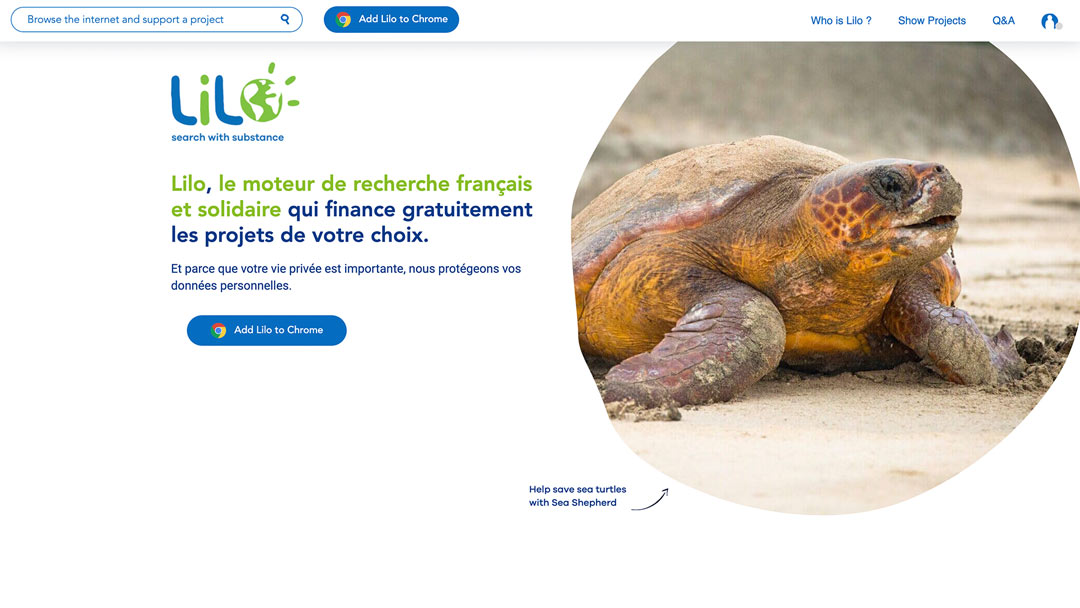 Searching with Lilo allows you to collect ‘waterdrops’ which can then be assigned to an environmental, social or animal charity of your choice. It also has a strong focus on privacy, preventing ad tracking and protecting user data.

Since its creation, Lilo has financed projects to the value of €3,643,045 and you can easily see how this has been allocated on their website.

This was just a brief overview of some of the alternatives to Google that you could be using to do your internet searching. The market for socially conscious browsing is continuously growing, so finding one that best fits with your values should not be hard.

Being powered by trusted engines such as Bing adds confidence that you’re getting good results and easily installed browser add-ins make them easy to set as your default search page.

Make the switch and do social good whilst you’re searching!